Maca root, or Peruvian ginseng, is a root grown at high altitudes in the Andes mountains. It is a powerful adaptogen that supports the body's endocrine, cardiovascular, immune and nervous systems. 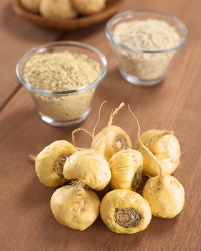 This superfood is also an antioxidant that contains 55 phytochemicals and 20 amino acids. It

This superfood has been cultivated for 2,600 years at altitudes of 9,000 - 10,000 feet above sea level. When the Spanish conquered the area in the Andes mountains many years ago, their animals didn't do well and stopped reproducing. The local people of the region recommended feeding the animals this Peruvian ginseng. They had remarkable results. Both the Spanish and their animals benefited from this food. It helped both the animals and the Spanish people adjust to the altitude and also helped the animals to be able to reproduce again.

It is non-toxic and non-addictive. It comes primarily in dried powder form, but can also be found in a juice and as an ingredient in other foods.

Here is one of my favorite maca products. It is great in smoothies!

This superfood can be consumed by starting with a couple of teaspoons or a tablespoon a day. You may want to periodically take a couple of days off from taking it to prevent your body from getting too used to it.

Also, I have found that it does help to alleviate altitude sickness. If you would like to use it for altitude sickness, begin using it prior to getting to the higher altitude. You will need to experiment with what amount is most beneficial.